How is Property Division Determined in Texas?

If you’re contemplating divorce, you’re no doubt thinking about what happens with all the things you own, the property you’ve acquired while you were married. The state of Texas is a community property state, which influences how property ownership is determined in a divorce. In Texas, the property that the couple owns generally belongs equally to both partners. 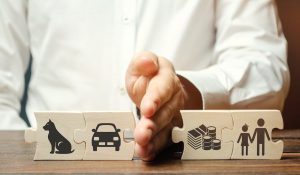 Monetary compensation from a personal injury settlement or lawsuit received by only one spouse would also be considered separate property. The exception is if the money includes a portion as compensation for lost wages. That money would be considered community property. If a property is proven to be separate, then it will remain the property of that spouse, and the court will not be able to consider it community property.

There may be situations in which the court does not split the community property equally and instead divides the property at their discretion based on specific circumstances. In cases like these, the court will consider relevant factors to decide what it considers to be a fair division. These may include considering whether one spouse is the primary caregiver for any children from the marriage, each spouse’s earning capacity, and how much separate property each partner owns.

Once the property division is determined, the court may, in some cases, award one spouse periodic payments from the other spouse. This is called alimony or spousal maintenance, and specific conditions must be met for a court to award alimony. These generally include:

Other factors apply, and a key consideration by the court will be whether the spouse who is requesting alimony has made documented unsuccessful attempts to support themselves.

If you are in the process of getting a divorce, you need an attorney who will advocate for you and make sure that you get all the property you are legally entitled to receive. Call (832) 534-2589 today to speak with a Texas divorce lawyer from BB Law Group PLLC who will help you understand the process and your options as you navigate this challenging time. We will fight for you so that you can move on from the divorce and begin the next chapter of your life with the property that is legally yours.

Don't change! You made it possible for this family to understand where we stood and how to work towards the best outcome.